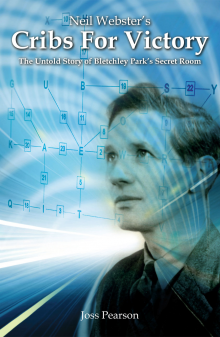 Cribs For Victory is a posthumous account of the secret code-breaking process in Bletchley Park’s Fusion Room during World War II by Major Neil Webster, one of the key members of the team involved.  The Fusion Room was the central unit where decrypted German messages obtained from Hut 6 were compared with the corresponding data extracted by the log readers from the daily radio traffic between enemy stations, thus enabling a complete wartime picture of the enemy order of battle to be constructed.

Neil Webster’s liaison role between traffic analysis and cryptography meant he was centrally involved in the search for ‘cribs’ – short pieces of enciphered text where the meaning is either known or can be guessed, allowing the whole cipher to be broken. His book describes this intensive search in detail, the intellectual and technical challenge, the personal stories, the setbacks and the triumphs.

Security clearance for publication of his first-hand account was only granted in 2010, more than 20 years after his death. Was it too close to the real truth about how Enigma was broken and the inner workings of British intelligence? Webster’s daughter, Joss Pearson, believes her father’s book was just too clear, both about the relationship between signals intelligence and cryptography, and about the habits of the German military mind that opened the door to understanding Enigma.

Reviews of CRIBS FOR VICTORY

"This is posthumous dynamite, security clearance for Webster’s first-hand account of Bletchley Park only being recently granted. A fine WW2 narrative."  Oxford Today

"Essential reading for anyone interested in the the relationship between signals intelligence and cryptography." Asa Briggs, History Today