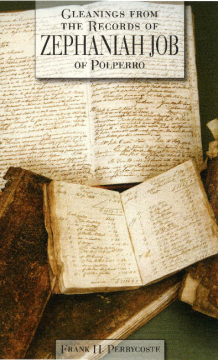 Gleanings from the Records of Zephaniah Job of Polperro

Frank Perrycoste’s Gleanings from the Records of Zephaniah Job of Polperro, first published in 1930, is based on a meticulous examination of the ledgers, letter books and other records discovered 100 years after the death of Zephaniah Job, the ‘Smugglers’ Banker’ who financed the smuggling and privateering trade that flourished in South East Cornwall during the latter part of the eighteenth century. It amounts to one of the most detailed and comprehensive studies of life in Cornwall in the late 18th and early 19th centuries, providing modern historians and students of the period with an invaluable source of information on wages, prices of commodities and a wide variety of other aspects of life in the county at that time.

Reviews of GLEANINGS FROM THE RECORDS OF ZEPHANIAH JOB OF POLPERRO

"Fascinating... worth every penny of £14.95 as a source book for Cornish historians." Cornwall Association of Local Historians Journal