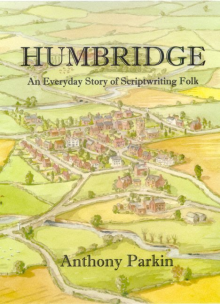 Humbridge, an everyday story of scriptwriting folk, follows the fortunes of Roger, the unassuming scriptwriter of a radio soap opera set in the fictional rural village of Humbridge. Roger finds his own life taking a dramatic turn when he and his wife Val move to a smallholding in Berkshire in a misguided attempt to ingratiate himself with Amabel, his politically correct Editor. Power-dressed Amabel, who lives in Tufnell Park and draws her inspiration for the series from a 'village' near Sidcup, finds her blueprint for Humbridge forcibly challenged. Meanwhile, events move rapidly out of control for Roger and Val in their new-found rural surroundings. Author Anthony Parkin, agricultural story editor of the BBC series The Archers for 25 years, draws on his own extensive knowledge of life in the country and the demands of writing for a popular radio drama series in this, his first novel.

Reviews of HUMBRIDGE - AN EVERYDAY STORY OF SCRIPTWRITING FOLK

"Parkin's delightful novel can be enjoyed in its own right, without any knowledge of the baggage which the author brings with him." Birmingham Post

"Archers fans will recognise some of the characters and some of the plot lines." Daily Telegraph

"A book that is both funny and informative and exposes how social engineering and political correctness can distort country life." Liverpool Daily Post

"Addicts of The Archers will have a grand old time wondering if some of the back-biting really did happen behind the scenes of their favourite radio programme." Worcester Evening News