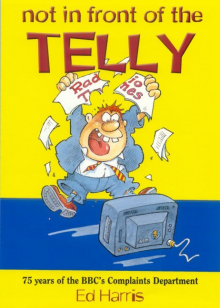 NOT IN FRONT OF THE TELLY

Ed Harris reveals some of the reasons why millions of viewers and listeners contact the BBC to carp, complain and condemn. In this unique peek behind the scenes of the quirkiest corner of the corporation, he charts the transition of the complaints department from a cosy cottage industry through to outsourced high-tech Information Centre. As well as tweaking the collective memory of a nation glued to the box, Not In Front Of The Telly will appeal to psychiatrists, psychoanalysts and other students of the human condition, and is required reading for those working in the burgeoning customer care industry today. After 10 years managing the BBC's Complaints Departments, Ed Harris includes dozens of real-life examples ranging from the utterly hilarious to the downright dotty in this specially illustrated edition.

"75 years of some 40 million viewers and listeners ranting about anything and everything." Richmond & Twickenham Times

"As much for today's call centre agents as a memento for all those in the past who have suffered the tyranny of the viewer or the listener." Prospero