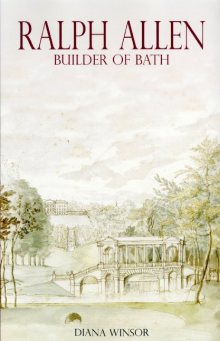 Ralph Allen (1693–1764) was one of three men who were responsible for the building of the Georgian city of Bath, but probably the least known. As a young Cornishman he came to the city as deputy postmaster and made an early fortune by reforming the postal service in England.  He also saw the possibilities in Bath stone, buying up stone quarries and engaging the architect John Wood.  A shrewd businessman, entrepreneur and philanthropist, he also loved books, art and nature. His great mansion Prior Park, designed by John Wood to demonstrate the beauty of Bath stone, welcomed a circle of friends that included Alexander Pope and William Pitt.

Ralph Allen: Builder of Bath is an intimate portrait of the man and his life in the context of the eighteenth century, as defined by his diary and letters together with illustrations of people and places of his time. Allen outlived his fellow builders of Bath, Beau Nash and John Wood the Elder.  His legacy is Prior Park, its gardens, and Bath itself, today fittingly recognised as a World Heritage Site.

"Anyone who knows and loves the architecture of Georgian Bath will enjoy Diana Winsor’s new book… thoroughly researched and put together with a sense of lively humanity and fun." Country Life

"A new look at the man who made Bath happen... throws more light on the shadowy figure of Ralph Allen." Bath Chronicle

"A truly insightful glimpse into the life of one of Bath's most famous residents." Bath Life