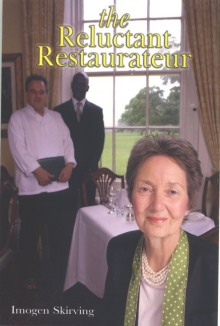 The Reluctant Restaurateur is the story of one woman's unwitting transformation of her Nottinghamshire family home into one of the most successful private hotels in Britain today, now famed for its cuisine and comfort, feted by celebrities and winner of the 2003 Outstanding Achievement Award. In a remarkably candid autobiography, Imogen Skirving vividly recalls her unusual childhood and how, after inheriting Langar Hall, mounting overheads compelled her to take in guests. She relates some of the bizarre and often hilarious episodes with chefs and customers as she struggled to keep both and reveals the secrets of her success, often in the face of adversity. Ghosts as well as guests are frequent visitors, as is a cast list of showbiz personalities and other celebrities. According to the BBC Test Match Special team's Henry Blofeld: 'Langar Hall is unique because there is no one else in the world quite like its owner, Imogen Skirving.'

Reviews of THE RELUCTANT RESTAURATEUR

"An amazing story of an amateur who takes on one of the most difficult businesses there is with no capital and pulls it off against the odds." The Oldie