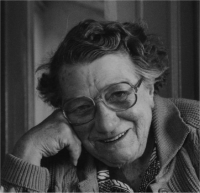 Evelyn Atkins and her sister Babs were two middle-aged sisters who bought Looe Island in Cornwall in the 1960s and moved there from suburban Surrey. Evelyn’s first book, We Bought An Island, first published in 1976, was followed by Tales From Our Cornish Island ten years later. She died in 1997 at the age of 87.

WE BOUGHT AN ISLAND