The story of Polperro Press

A little over 200 years ago, when England was at war with France and Spain, the fishermen of Polperro seized the opportunity to engage in a form of legalised piracy known as privateering. Privateers were armed vessels that were issued with licences (Letters of Marque) to attack and capture enemy ships.

The Polperro fishermen were famed for their seamanship. Years of smuggling contraband goods from Guernsey in their fast sailing luggers, running the gauntlet of the Revenue cutters patrolling the Channel, meant they were particularly well-equipped to take on slower French and Spanish cargo vessels. Many valuable ‘prizes’ were captured and brought back to Cornwall where they were sold for large sums of money, bringing great wealth to some of the Polperro families.

Despite Lord Nelson’s objection that ‘the conduct of all privateers is, as far as I have seen, so near piracy  that I only wonder any civilised nation can allow it’, there is little doubt that the Polperro privateers made a significant contribution to the war effort. 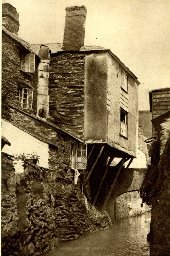 In due course, the Napoleonic wars came to an end – as, indeed, did the smuggling trade eventually and the Polperro fishermen resorted to more law-abiding methods of earning a livelihood. And when, in the 20th century, the little fishing port began to attract large numbers of visitors eager to sample the delights of the picturesque harbour and its surroundings, tourism provided a new source of income for the local inhabitants.

Many of the visitors who flocked to this corner of Cornwall were entranced by stories of the smuggling ways and days of times past and local businesses thrived on the new trade they brought. One man who prospered as a result was Frank Nettleinghame who founded the first Polperro Press at the famous House on the Props overlooking the harbour.

The Western Morning News in 1926 described it as ‘a daring piece of architecture with its 300 year old props’. Sixty years later, the Heritage Museum of Fishing & Smuggling opened nearby, reviving interest in Polperro’s extraordinary history and, with it, the dormant Polperro Press. The House on the Props still stands precariously over the stream that runs into the harbour, today a thriving guest house and restaurant.

And while contraband goods may no longer be offered for sale there, the Polperro Heritage Press has at least revived many a tale of times past… and no doubt many a local tradesman occasionally still raises a glass to the toast ‘Success to our Trade!’