View from the Teme Valley

Sometimes I think I lead a double life. Most of the time, I’m sitting in my office in the garden of my home in Clifton-upon-Teme, a small village overlooking the Teme valley in Worcestershire. Here I’m known as Jerry Johns, publisher by day, proprietor of the Polperro Heritage Press.  I publish books, mainly non-fiction and quite a lot of them with a Cornish connection of theme. Take a look at some of them on the website: http://www.polperropress.co.uk/

Why Polperro? Well, that’s where the Polperro Press started in the 1990s as an offshoot of the Heritage Museum of Smuggling and Fishing. In fact I was one of their first authors. And when I left my previous life with the BBC in 2000, I brought it up here to Worcestershire where it’s now based. 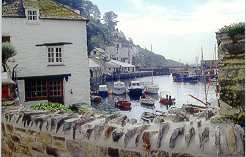 But Polperro, a little fishing village on the south coast of Cornwall between Looe and Fowey, also happens to be where my ancestors came from. I discovered that some of them had been busily engaged in smuggling and privateering there in the latter half of the 18th century. That led to my first book, Polperro’s Smuggling Story being published in 1994; a few years later it was followed by The Smugglers’ Banker: the story of Zephaniah Job of Polperro, and in 2010 my last book, Doctor By Nature: Jonathan Couch – Surgeon of Polperro. All are still in print and continue to sell steadily.

Down in Polperro they know me as Jeremy Rowett Johns, the author. I’ve even acquired a reputation as something of a local historian which has led to occasional TV and radio broadcasts. And I’m also one of a small group of people who run the Polperro Family History Society. It was founded ten years ago as a result of a number of Polperro cousins (we are all related) getting together there. Today the Society has more than 250 members, organises an annual weekend gathering there every year and publishes a Journal twice a year as well as several other publications.

Maybe this blog will bring the two halves of my life together….  Who knows?