Of the three daughters of Sir Gerald du Maurier, the eminent actor-manager of Wyndham’s Theatre in London during WW1, Daphne is certainly the best known. Born in 1907, she moved to Cornwall with her family in the 1920s where they rented Menabilly, the house near Fowey that she based her fictional Manderley in her best-selling book Rebecca. 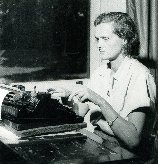 While Rebecca established her reputation as a novelist, Daphne du Maurier (right) is also remembered for her other books, among them Jamaica Inn, with its story of smuggling; Frenchman’s Creek, and The Birds which was turned into a Hitchcock horror film.

Daphne’s elder sister Angela was also an accomplished writer but had the misfortune of having her first novel, The Perplexed Heart, published in 1939, the year that WW2 began and soon after Daphne’s success with Rebecca and Jamaica Inn.

The youngest of the three talented sisters was Jeanne who became an accomplished artist, exhibiting at the Royal Academy in the 1950s. All three were known to author Michael Williams whose new book, The Three Du Maurier Sisters is published this month in time for the Du Maurier Literary Festival in Fowey in May.