An added extra publication that I have the pleasure of editing twice a year is the Polperro Family History Society’s Journal. It began life rather tentatively just over ten years ago, produced exclusively for members of the Society, and issue number 21 has just gone to press.

Its 76 pages are packed with news, articles and photographs of Polperro people past and present (mostly past) and there appears to be no shortage of material ranging from personal memories of growing up there to fascinating accounts of individual family members and their lives.

Contributions from members in the latest issue include the story of Charles Henry Pascoe, born in Polperro in 1867, who was one of the few survivors from the sinking of the Titanic. 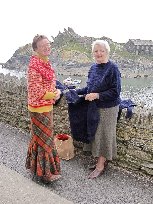 There is also an account of the knitting of the distinctive knitfrocks worn by local menfolk, prompted by the recording of an interview with Mary Wright (pictured left with Ruth Goodman), the author of Cornish Guernseys & Knitfrocks, soon to feature in a forthcoming  edition of the BBC Coast programme.Other articles include a look at the spread of Methodism in Cornwall; a trawl through local newspaper reports during the first few months of the First World War; recollections of a Talland childhood by the daughter of a 19th century vicar there, and news of a new issue of postage stamps on Ascension Island marking the Shackleton-Rowett expedition of 1921-22, featuring John Quiller Rowett who not only financed the ill-fated expedition but also the building of the Rowett Institute in Polperro in 1920.

The really extraordinary thing perhaps is that a small fishing village like Polperro actually has a thriving family history group of more than 250 members, some of whom are scattered across the world. Every year, many of them meet up there in April for a weekend programme of talks, walks and convivial entertainment. Many firm friendships have developed over the years as a result, perhaps because we are all distant cousins of one another.