I witnessed the closure of yet another local independent bookshop this month, this time just a few miles away from us in Tenbury Wells, Worcestershire. 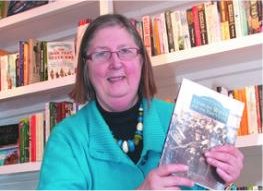 ‘Books, Books, Books’ has been a little haven of literary delights in the high street there for many years, until recently owned by Diana Ryan (right), a wonderful lady who knew her customers and, more importantly, was passionate about books. It was almost impossible to leave there without buying one of her recommendations.

Such places are now an endangered species. Where once upon a time almost every town had its own bookshop, now we are left with Amazon and a chain of Waterstones branches found only in cities and large towns. The rate of closure of truly independent bookshops selling new books has reached almost epidemic proportions.

Amazon’s domination in the market is truly monopolistic; so much so that it’s now quicker, easier and invariably cheaper to order both new and secondhand books from them than it is to go to your nearest bookshop.

Waterstones on the other hand is attempting to ride out the Amazon storm with James Daunt at the helm, trying hard to capture that ‘independent’ quality that the fast-disappearing smaller bookshops have – or had. Sometimes it works: their Truro branch for example, is an exemplar where the staff know and care about their customers. But the same cannot be said for all branches of Waterstones sadly. My recent experience with one of them (which shall remain nameless) suggests that where the manager had been parachuted in from outside the area and many of the staff don’t know enough about the area and interests of their customers, they are unlikely to succeed in the long run.