A few years ago an extraordinary account of life on one of the most remote inhabited islands in the world landed on my desk. The island concerned was Tristan da Cunha, located somewhere in the middle of the South Atlantic, and the MS was the work of the island’s chief policeman, Conrad Glass.

Conrad vividly described how his duties were divided between the occasional demands of his police work and the need to look after the island’s colony of Rockhopper Penguins; the latter often proving more demanding.  But I quickly realised that Conrad’s draft would need an editor to turn it into the book that I hoped it would become, a task that my former BBC colleague Chris Bates willingly agreed to undertake.

Entitled Rockhopper Copper, it was the first book to be written by a Tristan islander and, with Chris’s editing skills, is full of stories of rescues, volcanic eruptions, violent storms as well as the work involved in protecting the local wildlife... all told in the words of the island’s policeman and former Chief Islander. 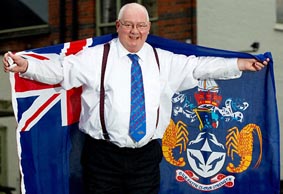 Shortly after publication in 2010, Conrad Glass was awarded the MBE for his service to the Tristan community and Chris Bates (pictured right) was appointed as the official representative of Tristan da Cunha, attending meetings and various international functions around the world. He also visited the island itself on more than one occasion.

Rockhopper Copper has continued to delight readers worldwide and visitors from passing cruise ships lucky enough to get ashore invariably come away with a copy personally signed by Conrad himself.  And when Chris Bates finally decided to retire from his role as the island’s representative last month, he too was awarded the MBE in the New Year Honours list.