Polperro’s six inns don’t just offer a warm welcome and good ale. They all have a fascinating history, some going back more than 200 years. 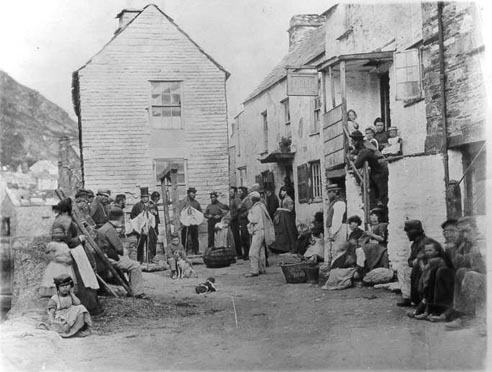 One of the oldest is the Three Pilchards (left)overlooking the harbour by the fish quay. Back in the early part of the 19th century, the Three Pilchards was kept by Charles Jolliff who came to Polperro from Launceston, married a local girl and stayed. In later years, it was often said contraband liquor was sold over the counter of the Three Pilchards: ‘If Charlie’s grey mare was saddled outside the inn at night, locals would know that another consignment of smuggled goods was due’.

The original Pier Inn, often referred to as the ‘New Inn on the Quay’ during the 18th century, features frequently in accounts of Polperro’s history. In March 1783 it was the venue for the sale of four valuable French and Spanish prize ships captured by a Polperro privateer named the Swallow. The sale, advertised in the Sherborne Mercury, attracted a large crowd of curious onlookers and prospective buyers to the harbour where three of the four vessels were berthed. Today, the Pier Inn is a private house.

The same New Inn was also used by John Rowett, a notorious Polperro smuggler, for a dinner in 1802 that he and his ship’s company were treated to by one of the Guernsey merchants from whom they bought their contraband goods. The cost of the meal, £9.18s.6d, was recorded by Zephaniah Job, who became known as the Smugglers’ Banker. At the time, the landlord of the New Inn was Benjamin Rowett, a cousin of his smuggling namesake. The origin of the present Blue Peter Inn is less certain, though its location right by the new pier suggests it could possibly have once been one of the ‘inns on the pier’ referred to from time to time in 18th and 19th century records.

The Ship Inn in Fore Street originally stood where the Post Office is today. At the end of the 18th century it was run by Charles Guy who was also heavily engaged in the smuggling trade between Polperro and St. Peter Port. Typical of his correspondence with the Guernsey merchants is the letter he sent in December 1799: “You will please ship on board the Mayflower for the account of Charles Hutton, ten ankers of Brandy, five of gin and five of rum, ready money.” An anker was an eight gallon barrel; ‘ready money’ meant cash on delivery.

Even more recent inns like the Noughts and Crosses in Landaviddy Lane have an interesting history as well. It was originally one of the three bakehouses in Polperro where bread and other items were baked during the 19th century. The name comes from the novel accounting practice then in use: bread orders were noted with a small or large ‘o’ according to size, and with an ‘x’ when they were paid for. The Old Mill House was another of the Polperro bakeshouses. At one time, dinners were cooked there for a halfpenny a time. A delectable aroma would fill the narrow streets around the harbour when the ovens opened and local folk hurried home with their Christmas dinners. The present building was built by William Henry Wright who came to Polperro with his father in 1891.

At the top of the village is the Crumplehorn Inn. Originally known as Killigarth Manor Mill, the mill wheel was powered by water that came from a mill pool located where the large car park now stands at the approach to Polperro. The Crumplehorn later became a farm and was converted to an inn the 1960s. It still has a working mill wheel.