Enjoying a few days away from the British winter weather last month in Tenerife I was surprised to come across the full story of Admiral Horatio Nelson’s only major defeat in battle which resulted in the loss of his right arm.

The Battle of Santa Cruz in July 1797 was initiated by news that two valuable Spanish treasure ships had taken refuge in the harbour there in the north of Tenerife, aware that the British fleet was blockading Cadiz following Nelson’s victory a few months earlier off Cape St Vincent. One them, the Principe Fernando, was seized by the British along with her cargo worth £30,000. But the other more valuable prize escaped capture, prompting Nelson to mount a seaborne assault on the heavily defended port of Santa Cruz.

His squadron of three 74-gun ships, three frigates, the cutter Fox and a mortar boat recently taken from the Spaniards, arrived off Tenerife on 21st July. The Spanish defenders were alerted to the possibility of an invasion however. An attempt to land a raiding party and gain a position above the town was repelled so, on the evening of the 24th Nelson decided to attack directly from the sea. The battle plan called for a combination of naval bombardments and an amphibious landing.

Several of the boats failed to land at the correct positions in the confusion, while those that did were swept by gunfire and grapeshot. Nelson's boat reached its intended landing point but as he stepped ashore he was hit in the right arm by a musketball, which fractured his upper arm in several places. He was rowed back to his flagship, Theseus to be attended to by the surgeon. Most of the right arm was amputated and within half an hour Nelson had returned to issuing orders to his captains. 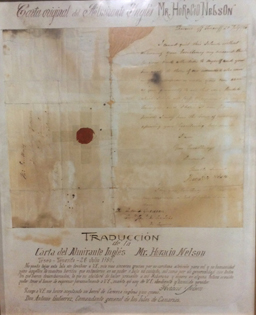 A force of almost 1,000 men made up the assault force, but many were lost in the attempt. The cutter Fox was also sunk by a lucky shot from a 24-pounder and as the battle ashore continued through the night, it soon became clear that the beleaguered invaders had no option other than to surrender.

The Spanish commander in Santa Cruz, General Antonio Gutierrez, allowed the British to leave with their weapons. This led to a courteous exchange of letters between Nelson and Gutiérrez. A copy of Nelson's letter (right) offering a cheese as a token of his gratitude is actually on display at the Military Museum in Santa Cruz. It must have been one of the first occasions he was obliged to write with his left hand.