The Fate of the Brilliant of Polperro

The Brilliant was a big three-masted lugger whose owners included, among others, Zephaniah Job and John Quiller of Polperro during the 1780s. Though she may well have been engaged in the smuggling trade that flourished between Guernsey and Polperro at the end of the 18th century, she was also credited with having seized a number of valuable prizes. References to her privateering exploits crop up frequently among Job’s surviving papers, including a detailed description of her rigging and equipment in 1786: 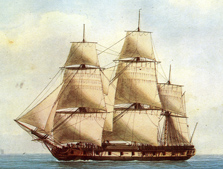 Hull, Masts, Yards, Standing and Running Rigging good as she came in from the sea.

The Brilliant was really a Guernsey ship but in 1793 Letters of Marque were granted to her commander, John Quiller, against French vessels. At the time, she carried a crew of 60 and was armed with 12 carriage guns and 6 swivel guns. Shortly after setting out from St. Peter Port she quickly recaptured an English ship that the French had seized previously. A few months later however, under a Guernsey commander, she disappeared, presumed captured or sunk by the French. There are a few tantalising references to her among Job’s letters to the Guernsey merchants but nothing to indicate her fate.

Nothing, that is, until I was contacted by a French maritime historian, Jean Rouffet

, asking if I knew anything about a vessel named the Brilliant that had apparently been captured by the French in 1793. He had come across a picture of a three-masted vessel on a dish (right) produced in Bayonne in 1800 which he had subsequently identified as the Brilliant, seized by a larger French naval vessel named Lionne after a brief but intense exchange of fire in December 1793.

The British prize was taken to Rochefort where she was much admired and soon taken into service by the French Navy. Renamed Brillant, she became one of the fastest ships in the French fleet and was credited with the capture of a number of foreign ships. Later service in the West Indies ended with her being declared unfit in 1799. After undergoing repairs, the Brillant returned to Bayonne where she was put on guard duty until eventually being broken up. Her timbers however were used in the building of a new lugger also named Brillant which went on to capture three British ships in 1803!