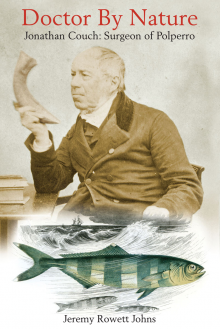 Jonathan Couch (1789-1870), surgeon apothecary of Polperro, was one of the pioneering natural historians of his day, paving the way for others such as Darwin and Huxley to follow. His own county of Cornwall was every bit as much a place of discovery as the Galapagos Islands and his reputation is secured by his great works, notably his four-volume Fishes of the British Islands which remains a standard work of reference today. But his lively mind also turned to the migration of birds and the habits of bats; he wrote about fossils and flowing plants, sharks and shooting stars, crabs and carpenter bees, porpoises and potato disease.

Doctor By Nature, drawing on much previously unpublished material, tells the story of a remarkable man who, born in humble circumstances, rose to become one of the leading natural scientists of the 19th century. As a young man, he turned his back on a lucrative medical career in London, choosing instead to serve the people of his native village as their doctor for 60 years. A classical scholar, Methodist minister, antiquarian and force behind road and bridge building projects, he was also a compassionate family man whose three marriages yielded 11 children and more than a fair share of grief.

Reviews of DOCTOR BY NATURE

"A fascinating read. It will also be of special interest to historians of natural history, providing as it does the background to one of the leading naturalists of his era." The Linnean

"I enjoyed this volume because, unlike some other books on a Cornish subject, Couch's life is placed in the context of his time. The cover design enhances the overall layout of the book with its excellent content and illustrations." Old Cornwall