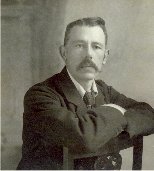 Every year, around 100 ‘cousins’ meet up in Polperro – some from far-flung parts of the world – to celebrate a shared family history in this little Cornish fishing village. And they all acknowledge the debt they owe to an eccentric Victorian antiquarian, Frank Perrycoste (right), who obtained the fingerprints of every man, woman and child there a little over 100 years ago.

This extraordinary feat came about as a result of a request by Sir Francis Galton, one of the early pioneers of the study of fingerprint identification (dactylography), who sought to establish if related individuals had similar fingerprints.  Perrycoste, who had recently moved to Polperro with his wife, offered to help conduct an experiment for Galton.

The task proved an arduous one. At one stage Perrycoste wrote to Galton: ‘At this time of the year the fishermen are usually in bed or at sea, and the only chance is to catch them at meal-time, and this often involves half a dozen visits to catch one man.’ By the end of the summer of 1903, he had obtained 865 sets of fingerprints from the inhabitants of Polperro.

In order to identify the relationships of the prints he obtained, Perrycoste drew up elaborate family ‘trees’ for each of the 52 families involved. And it was these, later deposited with the College of Arms in London, that were to provide such an invaluable resource for family historians several decades later. Descendants of the families whose ancestors were fingerprinted later realised what an invaluable resource they were: an entire village community’s genealogy mapped for future generations.

The Polperro Family History Society was formed 100 years after Frank Perrycoste’s experiment and today numbers more than 250 Polperro cousins among its membership, some as far afield as North America, Australia and New Zealand.