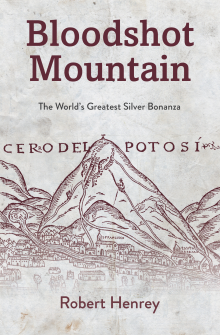 Also available as an ebook in Kindle and ePub formats.

Bloodshot Mountain: the world’s greatest silver bonanza is the story of how a red-tinted volcanic dome in the South American Andes became the planet’s largest silver mine and a symbol of unrivalled wealth and universal envy. In the 16th century the treasure within the Red Mountain’s bowels swept Europeans into a state of frenzied excitement as galleon-loads of silver were shipped across the Atlantic to finance the religiously motivated wars in Europe. The mountain’s redness symbolised the blood shed by untold numbers of Indians coerced into labouring within its shafts, handling the treacherously noxious mercury without which little of the silver would have emerged from its vast treasure house. Today Potosí’s habitants are amongst Bolivia’s poorest. It’s a story that continues to have relevance to our contemporary world, leading to shameful inequality, corruption, wanton disregard of the environment and raises questions about the true nature of money we continue to wrestle with today.